Why Bother Reaching Out…And Who To Touch?

A few years ago I had the privilege and pleasure of co-authoring You Don’t have to Do It Alone: How to Involve Others to Get Things Done with Dick and Emily Axelrod and Julie Beedon. At the beginning of the book we make the case for why NOT to involve others. It takes more time. It costs more money. In almost every case it increases the “hassle factor.” 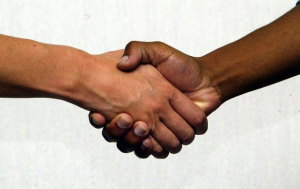 Not to mention you often don’t end up getting your way! So you have to ask yourself, “Why bother involving others in the first place?” We came up with enough reasons to convince ourselves it was worth writing a book about how to do it:

Recently I read about a phenomenon that shed even more light on involving others to get things done. It’s called the Happiness Effect and is based on contagion theory. That’s the same thing that explains why you catch a cold from a co-worker The contagion effect is also to blame for your child ending up with the flu after a play date with a small friend who misses the next week of school with a 102° fever.

Harvard social scientist Dr. Nicholas Christakis and his political-science colleague James Fowler at the University of California at San Diego built on this. They published an article earlier this month in the British Medical Journal on their 20-year study showing that emotions can pass among a network of people. Just like a cold or the flu. They discovered that we are influenced up to three degrees of separation away. Your joy may, to a larger extent than you realize, be determined by how cheerful your friends’ friends’ friends are, even if some of the people in this chain are total strangers to you.

The most amazing statistics from the research? Your next-door-neighbor’s happiness increases the likelihood of your own happiness by 34%. Even more striking: a happy friend of a friend of a friend makes it 5.6% more likely that you will be happy, too. Christakis and Fowler even noticed that people who smile in their Facebook pages cluster together, forming an online social circle like a “delirious flock of cyberbirds.”

So what does all this have to do with organizations? Expand the findings to relate to people’s perception of change. The influence informal leaders’ have on change efforts is widely accepted. That paradigm puts the informal leader in the center of the network. This most recent research however points out that someone in the next office (the workday “next-door-neighbor”) may have as much as a 34% chance of influencing the influencer’s attitude toward change.

The possible implication? It’s still important to focus on informal leaders and their support and inclusion in change efforts. But it may be just as important to pay attention to the whole system. In an intuitive way, it makes sense that influence should go both ways. The question, “How much easier and faster could change take hold in organizations if they were to engage the entire organization in the same ways they pay attention to the formal and informal leaders?