What do you need to not change? 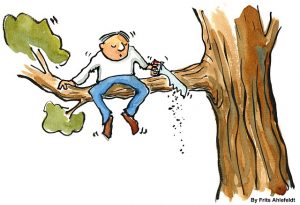 Several years ago I was working with an organization that was taking on a major transformation effort. They were restructuring the business, changing how people worked, and shifting the culture to one of “open communications.” Information had been power in this business so at face value, these goals made good sense.

I was meeting with the senior human resources executives in the company, exploring what these changes would mean for them and those they served in the organization. How were they going to “open communications” across the organization to support the transformation effort?

In the middle of a brainstorm to identify ways to do this, one of the executives (let’s call her Sandy) blurted out, “To tell you the truth, I am not that interested in more “open communications.”

The brainstorm ground to a halt. The rest of her team looked at her as if this were an act of treason. Sandy often had the best ideas in the group about how to make real change happen in the business. Now she was arguing against it.

I always look for ways to support people in a team taking risks. Arguing against the company’s transformation effort qualified as taking a risk by anyone’s measure. I piped in, “Well, we have the first example of ‘open communications’ alive and well in the room. Sandy can you say more about why you’re not interested in to opening communications in the organization?”

“I just checked my email and there are 83 new messages – just since we started this meeting 30 minutes ago. If that’s ‘open communications,’ count me out!”

Some heads nodded around the room. John, the team leader pulled out his PDA. “I’ve gotten 106 since we began.” The numbers started to get called out, “I’ve had 43.” “65 over here….” It was clear. “Open communications” wasn’t all it was cracked up to be. Without some restrictions on communications, this new culture was going to create more mischief than good. What was happening?

The entire organization had shifted its focus away from restricting communication to a free and open flow of communication. The goal had become a problem. This is common in a lot of change efforts. The old way of doing business gets dropped like a hot potato and the new direction becomes (in the words of my first mentor Kathie Dannemiller) “the truth, the light and the way.” It’s just like a pendulum, swinging from one way of working to its another.

Sandy wasn’t interested in sabotaging the transformation effort. What sounded like treason at first was actually common sense. You can change too much, even (maybe especially?) when it’s a good thing.

Want to increase your odds of being successful in change. Also pay attention to continuity. Here are four questions you can ask yourself to stay off the pendulum of change:

1. How do we need to work in new ways for this effort to succeed?
2. What would our world look like if we were wildly successful in making these changes?
3. What potential problems could this success cause if we’re not careful?
4. What do we need to not change so that our change effort is successful?

Does any of this sound familiar? I’d be interested in hearing any pendulum stories from your change efforts….