Go Slow To Go Fast in Your Change Work

Read on to learn about adding another Critical Success Factor to put in place for your change work to work to the list of seven I have described in another article.

I got an email last week from my wife. It was one of those notes that’s been forwarded across cyberspace until it finds its way into your inbox. The story was about some guy who played his violin for 45 minutes in a DC train station at rush hour. 1,097 people passed by while he was playing. Only a half dozen stopped and listened. He collected $32.17 in tips. Scenes like this play out every day in train stations around the world.

But this day was different. So was the guy playing the music. 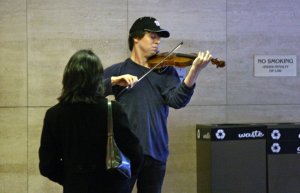 The violinist was Joshua Bell, one of the best musicians in the world. During his time in the station, he played one of the most intricate pieces ever written. On a violin worth 3.5 million dollars.

I did a quick google search and found the original article and a video link from the Washington Post, describing what you gain by going slow to go fast — in change work or anything else. It’s a fascinating read describing a detailed account of the entire performance.

The punch line to the article? Context counts.

I wonder how I would have reacted if I were in that subway station. What do you think you would have done?

How often do we not notice what’s happening right in front of us every day?

Thomas Kuhn (who coined the term “paradigm shift”) wrote in The Structure of Scientific Revolutions that we see what we want to see – regardless of information that directly contradicts what we want to believe is true. Once we lock in on a paradigm, we get stuck in it. We find what we’re looking for. So here’s a challenge: How do you find what you’re not looking for? How do find the Joshua Bell’s in your train station?

You have to move through your day slow enough to notice what might be extra-ordinary. You have to pause and reflect. You need to build in time to do this….especially when you don’t think you need to.

I’m on my way across the country to help lead a three hour meeting for an Advisory Board to a project I’m working on. Yesterday I was frustrated by how much time it was taking me to prepare for this short session, one I figured was pretty similar to dozens of others I’d done in the past. Having taken a break to read about Joshua Bell, I went back to work on my design work. But with a different perspective. The session could be the same as dozens of others I’d done in the past – or it could be much better. I re-created the agenda from scratch, integrating in several other streams of work underway in the organization. I’m pretty sure it would have been a very good meeting, even before the redesign. I’m more certain it’s now going to be a great meeting.

What trains are you rushing to catch today with the hope of crossing another item off your “to do” list? How much better would your work be if you did your own version of stopping to listen to the music?