Five Words Every Executive Should Use – Or Not

If you don’t recognize the impact and consequences of your lack of commitment to this mission critical project, you’re going to lose your people’s belief in your reliability as a competent leader. 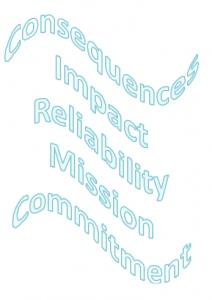 There are five words in the previous sentence that should have grabbed your attention so strongly that you couldn’t stop reading. Can you guess which ones? Okay I know, the graphic probably gave the answer away.

Even without my graphic, Frank Luntz knows which words resonated for you. He recently wrote a book, Words That Work: It’s Not What You Say, It’s What People Hear. According to his research, every executive should use these five words if they want to be heard:

Since consequences can be positive or negative Luntz says, “…the word instantly personalizes and dramatizes the result of a potential action.”

How did “impact” make the “Top Five?” It causes people to assume they will see a measurable difference. “Effort” and “solutions” don’t count: Americans don’t care about good intentions.

“Reliability” was practically an easy add. Luntz argues that our growing dependence on technology and dwindling free time makes reliability even more important than price.
“Commitment” is an old standby. According to Luntz’s research, it means someone is willing to put his or credibility on the line to achieve a successful outcome.

Last but certainly not least comes “Mission.” Mission is something that managers shape and inspires employees with passion and a vision of something better. It’s a window into your corporate soul.

These all seem like good words to me. I even use them myself sometimes. Yet something bothered me about the article Luntz wrote in Business Week. I’m not sure his research is solid. With a little research I discovered in addition to being an author, he’s a well-regarded pollster for the Republican Party.

But as leader, using words that have tested well with focus groups seems like the beginning of a slippery slope. Where do you draw the line? What if Lutz’s next book has a new list of five words? Do you discard the first list? What if you need to say something different to the people in your organization than Luntz’s words allow for?

Call me old fashioned but I’d opt for authenticity over focus group research every time. And that’s the same advice I give my clients. When someone speaks from the heart instead of from cue cards I can tell. I bet you can, too.

The first sentence of this post may have captivated you. According to Frank Luntz it should have. To me, it reads like a jargon-filled string of words lacking soul.

What do you think?